take that, Anne of Green Gables! 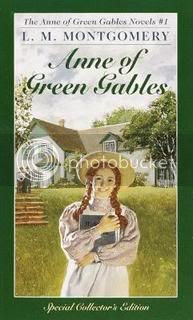 Caitlin, you had better fold up your Anne of Green Gables tent and slink away before the idiots nut jobs good citizens of North Bellmore, Long Island come after you with their torches ablaze...

Think I'm kidding? I just came across this. I checked it out. It's true.

(And yes, I'm a Long Islander, but - North Bellmore is in the Other County.)
Posted by teabird at 5:25 PM

Oh please! People are becoming increasingly too sensitve. This is political correctness running amuck! Why are people willing to become offended? Because some uninformed idiot tells them they have to be. Some things need changing but things are getting out of hand. Where is everyone's common sense?

I love Anne. She was plucky. No matter what happened she prevailed.

Absolutely true, BettyBoop. That's one of the reasons we love her so.

I saw that article. I thought it was pretty silly myself. I suppose I should never let my children read or watch The Diary of Anne Frank because those awful Nazis are mean to Jews. And seeing as how we're Jewish, we don't want them to get the idea that it's okay for people to treat us that way. Because OBVIOUSLY that's the message behind it... (giant eye roll here)

Honestly. This does not improve my faith in the human race, or some parents in particular.

When I was growing up, my parents had any and all books on bookcases throughout the house. We could read whatever we chose, they were not self-censoring. The worst thing that happened was that I learned that some books were boring, or stupid, or not worth reading.

Oh, except after I finish typing this, I'm going out to commit some serial murders ...

That's just silly talk. What odd people live in this world. Thanks for sharing.

Total nonsense! What are they thinking about? Idiots! Banning Anne, that's about the most ridiulous thing I've heard in a very, VERY long time! yuch!

Ditto what larjmarj said. Twice.
People need to get a life, and an education. Or at the very least some common sense.